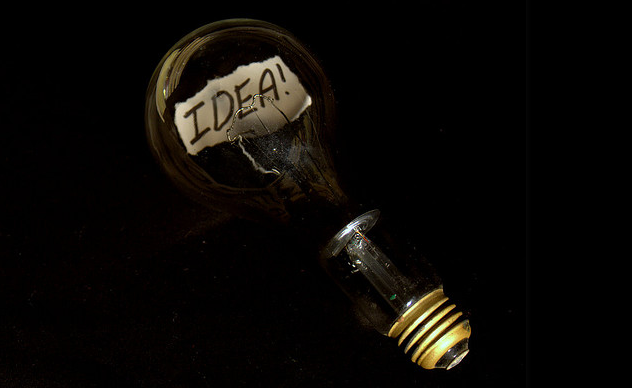 Almost daily, authors are unwilling to discuss their new book project or idea with me (or anyone) for fear that someone is going to steal it from them. They worry it will be copied or adapted before their super awesome unique thing is put to print. I think that is ridiculous. Why?

My idea is awesome and unique!

No, it isn’t. Every day there are millions of people coming up with ideas. There are thousands of people thinking about every aspect of everything. If it’s a thing, people have thought about a million ways to do it. There are exceptions sure, but for the most part, it’s been done. The people making waves now are the ones finding new or cool ways to do it. This is the same for books.

Ideas are just that… ideas. They aren’t books. It takes more than one cool idea to make a book. I personally store any new one (I have tons each day) in a document, and when I’m putting a book together, I pull out anything that fits together and put them into the outline. I try them out and put them back into the story folder until I need them. I couldn’t care less who read that document because they are nothing more than fragments of some potential thing that I may do in the future.

If anyone went through that document, it’s unlikely they would find anything truly unique. Maybe some cool twists on existing concepts, but for the most part, it’s just a rehash from a new perspective or a different one. That doesn’t make them useless, it just makes them what they are, ideas.

People seem so afraid their idea is going to be stolen they never talk about it. The fact is someone has probably done it, sometimes dozens of times. I can guarantee you that if you handed the same characters, setting, plot and story outline to ten different authors, you would get ten very different books back. We all write differently. We all have our own voice and style. We would take those ideas and make a book out of them. Our book.

You think it’s new for people to copy and adapt on ideas, in every aspect of the world, let alone fiction?

Last year I remember reading a thread on the Kindle Boards. An author was complaining that some other author had stolen his idea, concept, story etc.

With a tiny bit of research, it seemed that he was jumping the gun quite a bit. While there were some similarities, they were two very different books (I could tell that from the samples alone) It would seem he was so upset with what he thought was happening, he failed to realise that this other guy just saw the same trend he did.

The books in question were zombie books.

The first author claimed his cover, blurb, reason for writing it among other things were a rip off. It seemed to me that they had both been heavily influenced by Robert Kirkman (Walking Dead) and even Dawn of the Dead before it. This guy was certain he was being conned, someone looking to jump on his sales bandwagon. Once people started pointing out there seemed to be no link he was suggesting, he asked for the thread to be closed.

If he had calmed down, thought about it, before posting. He likely would have come to the conclusion that zombies are popular, and they weren’t that similar at all. This guys were very likely influenced by much more popular titles (like his own appeared to be), and it was just a coincidence.

The fact this author’s book seemed like a rip-off of The Walking Dead made me smile slightly.

People who enjoy a genre or trend follow it. This goes for fans and writers. Not just because it’s successful and a way to make money because they like it.

It might annoy you that similar books to yours come out. There is just nothing you can do about it. If you found something that sells well and readers like, bad luck, there are going to be similar products up within weeks, if not days.

Trends in publishing have been around since publishing started. In the past, those trends were controlled by the amount of books being released by publishers. With indie publishing, there is no barrier. There are dozens and dozens of similar titles being released weekly. This has led to some authors jumping on the “My ideas are being stolen” bandwagon. It was always happening, now it’s just happening quicker.

Vampires were super popular a while ago. Then it seemed to shift to zombies. It would appear witches and shape-shifters (with abs) are the flavor of the month right now. They are all being copied, twisted and written by the dozen each week right now. If you are writing a book about one of these popular tropes, someone else is probably doing something similar right now.

This isn’t a problem. It’s only going to bring more attention to the market and sell more books. If everyone likes one book about witches, you can be sure they will be hunting a bunch of others the same. Look at what happened with 50 Shades of Grey. It pretty much spawned the New Adult genre on its own. It wont last forever, but be happy that it’s popular while it is.

The Hunger Games Stole My Idea

One of the most famous cases being accused of this recently was the Hunger Games.

Many people (me included) consider it a rip off of Battle Royale. The similarities are significant, and it appears to be heavily influenced (if not a direct rip off) of the story. The author has been quite clear that she had no idea about Battle Royale. She explained where her idea for the series came from, and it had nothing to do with the Japanese book.

Who are we to call her a liar?

The fact her series is significantly more popular worldwide than Battle Royale ever was. That would indicate she took that idea (influenced or not) and did something new with it. That twist was a hit with the market.

I often come up with an ideas for a books that I think might be was cool. A recent one was a mash of a few other movies and books I had seen, but different enough to make a cool new story and twist on the idea. Then I came across a movie that I had never heard about, that sounded familiar.

I downloaded it and started to watch. It was almost exactly the same as the idea that I had. The same plot, concept and even setting.

People come up with ideas all the time. If I had written that book, I’m sure I would have been accused of ripping it off. If I had never come across that movie, put mine out, someone would have made that link at some stage.

This happens more than you think. Ideas of a similar nature (especially when there is a trend underway) happen all the time.

Ever notice how several similar movies come out at the same time? Are they ripping off each other’s ideas and selling them to studios? No, it’s human nature. If something is cool people think about it, dream about it, write about it. Eventually ideas become stories for writers. It’s just a law of averages that two things will end up similar.

With my idea, that is probably what happened. We both saw something similar and came to the same twist conclusion. That or he read my mind and stole my idea… that bastard… I want my money!

But my book was stolen!

There is a difference between a trend and something being similar, and your book being stolen. In the rare case that someone has stolen your copy (blurb), cover and storyline to the word, then you may have a case for plagiarism.

In fact, this is becoming quite prevalent with more and more books being stolen (the actual whole book) then uploaded by a new author.

This is a serious problem and not at all related to what I was talking to above. If your book has been stolen or you think that there is direct plagiarism, then I would report it either Amazon (or whoever your distributor is) or your lawyer.

Do you protect your ideas like a secret formula?

Have you had your book stolen? What did you do?

Do you think ideas are sacred or cheap?

Tell me why in the comments.