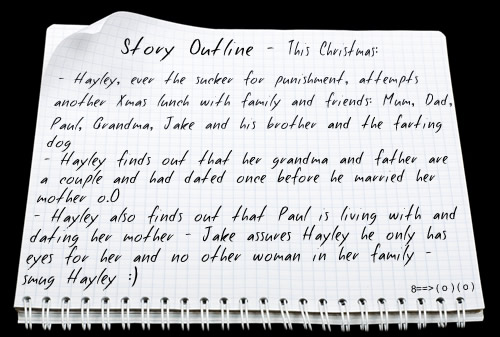 Author Jim Johnson has decided to set himself a challenge. He’s going to write three novels in three months. For some that is a very bold challenge. In order to achieve this Jim has decided on a plan. One part of that plan is to carefully outline his three books and to do that he is enlisting Scrivener‘s help.

Jim has has kindly given us permission to repost how he outlines and how Scrivener helps with this.

Largely summarizing my videos, but in essence: I start off with a big virtual funnel attached to my brain. Into the funnel goes the collective data from books I’ve read, movies and TV shows I’ve watched, people I meet, the life I live, etc. All that goes into the hopper and churns around. Ideas percolate and form and start to gel into characters, story ideas, plotlines, possibilities.

I latch onto something that appeals, then start focusing on that genre and setting and so forth. I amp up the reading and watching in that genre, and start to absorb the essence of that genre so that I can build a baseline of tropes and feel for the genre. When writing, I’ll want to make sure I’m hitting the right tone and tropes so that my work is similar for readers but unique.

Character is usually what I focus on first–readers read for characters and I feel characters are the most important parts of stories. I develop a character about the same time I start thinking about all the horrible things I’ll put that character through.

I don’t bother with long character bios–like real people, my characters grow and evolve and change, so I’ll do maybe a few sentences of ideas and notes and thoughts on who the character might be. I go rooting around google for an actor picture that might fit the character.

All this data takes the form of voice recordings into a digital recorder. Those notes get distilled into a transcription of the best bits, that gets added to the Scrivener project file for the series or book or whatever. I’ll continue to refine those ideas until I get to a happy place with character notes, series notes, and plot notes that I feel I can grab the plot outline and start cooking the real deal.

I’ve always preferred to have signposts along the way while writing as opposed to writing into the dark. I’ve experimented with both processes over the last few years and I am way more productive and efficient as a writer when I have some sort of outline in hand.

For the Pistols and Pyramids series I wrote last year, I had full outlines for the first four books. Each book had ~19 chapters, and I prepared a one sentence summary for each chapter before writing. I wrote the first five books, each about 32-35k words, in a heat from January to April-ish. Published the first three last fall.

I continued to refine my process and have used McKee’s Story and Libbie Hawker’s Take Off Your Pants (TOYP) to further hone it. For the Urban Fantasy series I’m writing now, I used the TOYP outline and tweaked it for my use, and I’m still in the process of refining it and making it my own. But the questions posed in the TOYP book helped me a lot in seeing the bigger picture. These novels will be 75-90k words long, and I knew I wanted a better outlining process for the longer works as opposed to the novellas I wrote last year. I wanted to make sure I had the essential story elements in place before writing.

Those essential story elements are the way points from the beginning of the story to the end. How I get from waypoint to waypoint is the pantsing fun part of the writing, but the waypoints provide the structure I need that gives me the confidence I need to write forward. I can play around getting from Point A to Point B to Point C, but I know I’ll get to those points eventually. Sorta like wanting to drive from Washington DC to St Louis–I’ll hit specific points on the map, but I’m free to take a few detours and side-trips along the way.

I use Scrivener to build my outline and use the hell out of the notecard feature. It’s so great. I love it long time. I’m working on sticking both the TOYP outline pieces in there as well as a sentence summary of what I want the scene to be. Once I finish the scene or chapter, I revise the text on the notecard to tell me what happened in that scene. Sort of pre-outlining, then writing, then post-outlining so that at a glance, I can look at the notecards and see where I’ve been and where I’m going.

The note cards also help me with balancing the story among the various characters. With this new series, I’m experimenting with writing the main characters scenes in first person, and cutting away to supporting character scenes that I’ll write in third person limited. Curious to see if that works. But using the labels option in Scrivener, I can color-code each card for the various characters so just by glancing at the outline mode or the corkboard mode, I can see the colors and know if one character is getting too much focus time or has too many scenes too close together.

I figure the main character (MC) will take ~70% of the scenes, since the book is largely about her, and the various supporting characters will take ~30% of the scenes. Simple math tells me if I’m writing a 90k novel consisting of 1500 word scenes, I need ~60 scenes in the book. 70% of 60 is 42 scenes for the MC, and 18 spread across the rest of the characters. The numbers will fluctuate because so far my scenes are coming in much shorter than 1500, but the ratio of MC scenes:other character scenes shouldn’t change.

Why does that matter? Because it’s an outlining tool. If I’m building my outline in Scrivener’s corkboard, and I know I need 42 scenes from the MC point of view (POV), I can simply create 42 note cards, label them all ‘Chapter #’ and then start plugging them into the framework where it makes sense.

And then I take those 16+ other character scenes and start plugging those in as well, where it makes sense and also spaced out so that I don’t have too many scenes with the same character bunched up together.

I can illustrate some of this as follows, using the final revised outline from Pistols and Pyramids #1: (click on the image to make it mo’ bigger)

The novella’s written with three POVs: Tjety (green), Ruia (blue), and Zezago (red). Tjety is the main character and has the most POV chapters–10 of the 20 in the book. Ruia is effectively a second main character, and owns 8 of the scenes from her POV. I wanted the antagonist of the piece to have some chapter love, and gave him two. They’re all color coded and spaced out so that I can see what each character is up to and that they’re not so spaced out that a reader might forget what’s going on with a given character.

The descriptions on the cards evolved as I wrote the manuscript. They started off with a sentence each at most, and then once I wrote each chapter, I filled out the description so that I could remind myself what happened in that chapter without having to reread the chapter, sort of a high-level summary of each chapter. That’s why these cards look so robust–they’re the end result after outlining and drafting rather than the starting point. (And even then, now that I reread them, they’re not actually reflective of the final version of the manuscript. Probably 90% there, but there were some late modifications that would have tweaked these cards, but I didn’t bother because the story was finished and I had another book to write.)

PS: For further information about outlining with Scrivener or to follow Jim as he works on his challenge, check out the video series–specifically the second one as it covers outlining–he’s putting together as he goes.