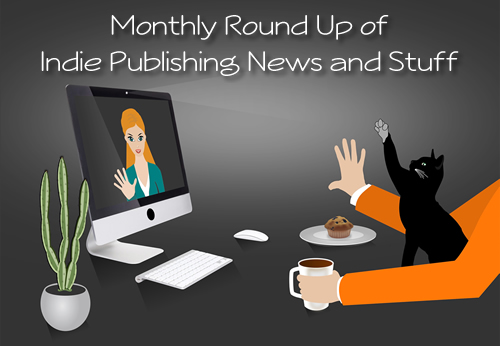 Welcome to the Roundtable Roundup, our monthly podcast (first Thursday of the month) where we invite a guest or two to join us live to discuss the previous month’s news and views from the self-publishing and indie industry.

After two and a half years of quarter-over-quarter growth, Indie eBook market share shrinks significantly. Most of the slack seems to have been picked up by Amazon Imprints with a small increase from other publishers.

Will the real Stephen King please stand up

Stephen King claimed that Amazon was deceptively marketing the other ‘Stephen King’s work as his work for several years and they had not been able to resolve the issue. He called on his followers to report this to Amazon.

Since then he was also made aware of B&N doing the same. B&N were able to rectify that problem in 4 hours. The latest update says that Amazon is now making the other Stephen King use his middle initial and also includes a note on all of this books stating that there are a number of authors called Stephen King and if you want the author of The Shining and The Stand to visit the link provided.

Changes to the Kindle Publishing Guidelines

October also saw Amazon release a new version of its Kindle Publishing Guidelines (PDF). The new changes include ToC be placed in the front of the eBook as well as other small details that don’t seem like they’ll be an issue for most of us–unless you use images of tables, those should be html tables now.

Changes to the Amazon pre-order rules

Now, when you set up a preorder it says you must upload your final manuscript at this point, however, this is not the case. You can still upload a draft or part of your manuscript and then upload the final manuscript later. What has changed is that they are removed the 10 day before going live deadline. However, you will no longer receive those reminder emails about the upcoming publication date.

As reported by Zoe (from chatter in closed Facebook groups) – https://kdp.amazon.com/help?topicId=AGSSZQVFKECO5

If you have a second, an iTunes review would be VERY appreciated!
Alternatively please feel free to leave a comment 🙂
See you next month!