On December 7th 1941, hundreds of Japanese fighter planes carried out a devastating surprise attack on the American naval base at Pearl Harbor in Hawaii and changed the face of World War II.

Last month eight authors published the anthology: Pearl Harbor and More: Stories of WWII-December 1941. We invited some of those authors on to talk about writing World War II fiction and the diverse stories they included in the anthology.

Due to a confusion with recording time we ended up recording twice. The first part is with Marion Kummerow, R.V. Doon and Robyn Hobusch Echols, while the second part is with Alexa Kang. All are authors from the anthology.

The stories and authors 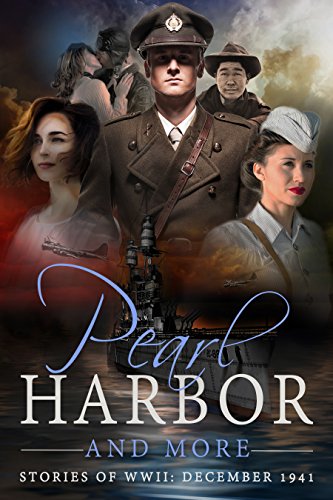 Deadly Liberty by R.V. Doon: Connie Collins, a navy nurse on the hospital ship, USS Solace, takes liberty the day before Pearl Harbor. Her budding romance wilts, an AWOL nurse insists she find a missing baby, and she’s in the harbor when WWII erupts. Under fire, she boards the ship–and witnesses a murder during the red alert chaos. When liberty turns deadly, shipmates become suspects.

Christmas Eve in the City of Dreams by Alexa Kang: On his last night in New York, a young grifter sets out to turn the table on those who shorted him before he leaves for the draft. Will he win or lose?

Turning Point by Marion Kummerow: Eighteen-year-old German Jew Margarete Rosenbaum is about to be sent to a labor camp, when a bomb hits the building she lives in. Emerging from the rubble she’s presented with an unexpected opportunity. But how far is she willing to go to save her life?

I am an American by Robyn Hobusch Echols: Ellen Okita and Flo Kaufmann are high school seniors in Livingston, California. Ellen is a first generation American who lives in the Yamato Colony, composed of about 100 families of Japanese descent. Flo’s father is a first generation American. After Pearl Harbor, the war hits home fast and brings unforeseen changes to them and their families.