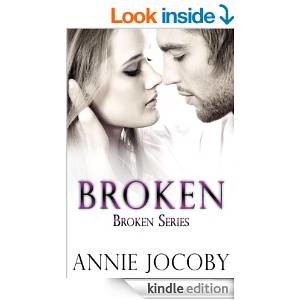 Annie lives in sunny Southern California with her beau and three furry babies. She was originally from the Midwest, having lived in Kansas City, Missouri for most of her life, where she was an attorney for 11 years. However, even while she was defending clients and going to court, she knew that the job wasn’t right. Because she always wanted to write. She was an avid reader and knew that there were stories in there somewhere, just waiting to come out. Finally, in 2013, she published her first three novels about Ryan and Iris – the Illusions series. Ryan is a hot rich guy and Iris is a slightly dizzy attorney with a failing practice. Nick was a secondary character in those novels – the sarcastic best friend who never met a hot woman that he didn’t want to bed. And usually succeeded in doing just that. Nick got his very own story in Broken, and, lo and behold, there was a decent guy under all that bluster after all! Two other novels about Nick are planned, and then a series of New Adult novels featuring Dalilah, who is the daughter of Iris and Ryan.

Annie has had a very successful year, selling 32,000 books in the last 12 months.  To read more about Annie’s secrets to self publishing success, check out her kboards thread HERE.

Also, pick up one of Annie’s books HERE.